For somebody who usually plays villains, Dennis Hopper is a pretty nice guy. And he recently heaped praise on his co-stars in the movie Elegy, including Ben Kingsley and Penelope Cruz.

“For the first time, I really looked at her as a woman – she’s like a Sophia Loren, she’s like this earth mother who has power. I was really impressed with her when I saw the film.”

Good stuff. And he had much to say about Kingsley, with whom Hopper shared many a scene. But since this is a Sophia Loren site, we won’t focus on that so much.

Elegy is in theaters now. Go check it out and see if Cruz lives up to Loren.

If there’s something more dangerous than anything else in this world, it’s the attempt by one sex symbol to outdo another. The result can be a fight of epic proportions. And though such a fight never existed between Sophia Loren and Jayne Mansfield, they probably came pretty close in 1957.

The two were attending a dinner party and Jayne Mansfield, in an attempt to draw attention to herself and away with Loren, wore an incredibly low-cut dress that revealed the cleavage she was justly famous for. While posing for a picture with Loren and Mansfield leaned over, her bosom nearly spilled out of her dress. A tiny bit of one nipple can be seen in the picture.

Loren, accordingly, looks rather disgusted in the picture, ignoring the camera and instead giving Jayne Mansfield’s breasts an icy glare of contempt. And to be honest you can’t really blame her.

In an interview with the Daily Express, when asked about what makes her so active and keeps her skin so vibrant, Sophia replied “It depends on genes. It is what it is”.

Also in the interview she commented on her upcoming role in Rob Marshall’s musical Nine, “I have a wonderful opportunity to film a picture directed by the brilliant Rob Marshall,” she said.

“I’m no Barbra Streisand but I will try to sing a little. I will definitely not be dancing though,” she told us on a recent visit to the UK,” she added. 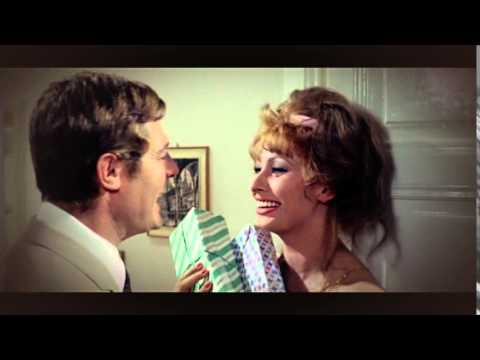 Yesterday, Today and Tomorrow (originally known as the Italian Leri, Oggi, Domani) is a 1963 comedy starring Sophia Loren and Marcello Mastroianni. It’s somewhat unique in that the film is comprised of three short stories, each with couples from different parts of Italy. In each case the couple is played by Loren and Mastroanni.

In the first tale Loren is a woman who stays out of jail for her troubles by constantly remaining pregnant through the help of Mastroanni (who would refuse?). In the second they play a pair of lovers who meet in secret and who must work out all their problems in a car. And, in the third, Loren plays a hooker looking to help a neighbor get back to their seminary. Mastroanni plays one of her johns who she enlists to help.

The film managed to do quite well, winning an Academy Award, a BAFTA and a Golden Globe.

Guess Jeans latest Spring collection has been inspired by the Italian sex symbol Sophia Loren. The range has aimed for a glamourous, sultry and sexy look.

The range was shot by the evergreen Canadian rocker Bryan Adams, who seems to keep his fashion photography work understated. Adams shot the collection at Melody Ranch outside L.A., which was transformed into a Italian town for the shoot.

The range is set to recapture the frenzy for Italian imports that occured in America in the 1950’s. Including cap-sleeved blouses, sexy silhouettes, summer frocks and gingham micro shorts.

The Swedish model Line Gost posed as Sophia Loren  for the Adams shot and as you can see from the pictures below has an uncanny resemblance to the Italian seductress.

Legendary Italian film actress and Academy Award winner Sophia Loren was known across the plains of the planet as one of the sexiest women alive in her time, an image that lives on today. It was inevitable, then, that she would draw a man to spend her life with, and that man was film producer Carlo Ponti.

The pair met in 1950 when Ponti was judging a beauty contest. He subsequently cast her in a few roles that led them to becoming close. He tried to divorce his first wife and marry Loren by proxy; however Italian courts at the time would not allow it, and they were forced to deny being married in 1960. They were formally married after becoming citizens of France in 1965.

Sophia Loren took time out for her rehearsals in London for the musical broadway hit, turned film “Nine” which is directed by Rob Marshall, to attend a function in a top London restaurant.

Sophia was spotted with the Black Eye Peas, Fergie, Marion Cotillard, Judi Dench, and Kate Hudson. Loren is penciled in to play Federico Fellini’s mother in the upcoming movie.

Penelope Cruz, Nicole Kidman and Daniel Day-Lewis also have roles in the film.

This website uses cookies to improve your experience while you navigate through the website. Out of these cookies, the cookies that are categorized as necessary are stored on your browser as they are essential for the working of basic functionalities of the website. We also use third-party cookies that help us analyze and understand how you use this website. These cookies will be stored in your browser only with your consent. You also have the option to opt-out of these cookies. But opting out of some of these cookies may have an effect on your browsing experience.
Necessary Always Enabled
Necessary cookies are absolutely essential for the website to function properly. This category only includes cookies that ensures basic functionalities and security features of the website. These cookies do not store any personal information.
Non-necessary
Any cookies that may not be particularly necessary for the website to function and is used specifically to collect user personal data via analytics, ads, other embedded contents are termed as non-necessary cookies. It is mandatory to procure user consent prior to running these cookies on your website.
SAVE & ACCEPT